As noted earlier, there were four openings this past weekend on North Coast stages. For my North Coast Journal column, I get an 850 words, about twice a month. So in this week's issue I reviewed two shows, and will do the other two next week. What follows is a longer version of what I wrote about Cornerstone Theatre's Jason in Eureka, based on its opening night Thursday. It closed with its third performance Saturday. 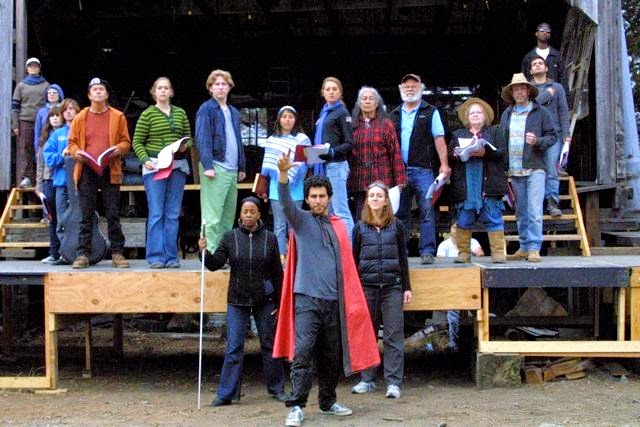 Under uncertain clouds on a warm August evening, the crowd standing inside the entrance to the Blue Ox Millworks Historic Park heard a witty prologue concerning Jason and the Golden Fleece, performed by a barbershop quartet (the Millworks’ chief, Eric Hollenbeck, sang bass), assisted by a puppet show.

Then a funeral scene on a grassy hill to the left, where a young man on his cell phone learns from his lawyer that he has just inherited a Victorian house in Eureka (“C and Cedar—that area”) from the mysterious great-great aunt now being buried. The mythological theme was sounded again, and there to the right, high on the prow of the Millwork’s historic wooden ship, was Jason himself. 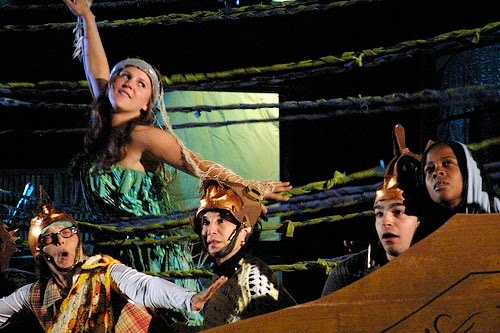 Then the audience was led farther into the park, to the bleachers in front of the large stage where in the quickening darkness the collaborative production of Jason in Eureka unfolded, captained by the Los Angeles based Cornerstone Theater.

As directed by Laura Woolery, half the action was set in the street facing the century-old Victorian house in contemporary Eureka, where the young heirs, John and his wife Maggie, decide to clean out its legacy of old books and make substantial repairs so they can live there. Born in Eureka, John recently lost his timber mill job. Maggie works at HSU. That she’s Wiyot figures profoundly in the ensuing story. They meet neighbors and various others, including those responding to the stranger sleeping in the yard, a silent veteran named Jason.

He is of course the link to the alternating half of the play, which depicts the classic quest of Jason and the Argonauts for the golden fleece. The contemporary Jason is looking for “gold,” too, which causes Maggie some concern, with its reminders of the Gold Rush. 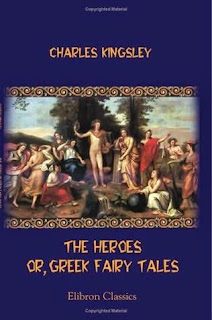 Playwright and founding Cornerstone member Peter Howard used months of interviews and other encounters in Eureka for the contemporary story, and adapted the Jason story from a book for children by Victorian author Charles Kingsley, partly because it was written in the Gold Rush era of Eureka’s birth. (Kingsley is also notable for the phrase “Westward Ho!,” the title of his novel that includes a search for gold in the Americas.)

With Howard’s skillful script but also the elegant scenic design by Nephelie Andonyadis (including a delightfully old-fashioned “wave machine”), clever prop designs and especially the acting, singing and stage movement, these two stories together made ragged magic.

Most of the music and movement and other more theatrical elements were featured in the Jason and the Argonauts story, while the contemporary story was more naturalistic, and chatty. Stylistically, the theatricality along with characters making declarative statements suggested an evening out of the 1930’s Federal Theatre Project: Greek myth meets The Cradle Will Rock. But its content was more careful (so politically balanced that one character expressed sentiments on both sides of the recent Timber Wars) and relentlessly positive. Everyone’s individual quest is honored, beginning with the community’s response to the homeless Jason.

What this is about ultimately is the power of story to help define a community to itself. It combines local facts and testimony with an outsider perspective--much as a journalist might, who asks questions, listens and senses a pattern or story, tests it with more questions and probing, and then shapes it all into a narrative that allows for contradictions and ambiguity. In this case, it is a story that finds a pattern in linking Eureka's past to its future.

It is perhaps a failure of North Coast journalism that this journey was not better documented, so the larger community could participate, absorb this story and test it against other stories. But some version of that will probably occur, especially among the participants and the participating organizations: Blue Ox Millworks, Ink People Center for the Arts, Sanctuary Stage and local schools.

The triumph of this complex collaboration can only be symbolized by the onstage ease and energy of Cornerstone’s Helen Sage Howard (as Maggie), North Coast community theatre’s Sam Cord (Jonathan) and 6th grader Joana Barragan Carrillo (a neighbor girl), each seeming to inspire the other. Adina Lawson, who teaches theatre at Eureka High as well as acting in community theatre, seemed to be having a great time working with the Cornerstone actors and amateur actors in the Argonaut segments. In the contemporary story, Rob Hepburn of Veterans for Peace brought particular reality to the part of Dennis, a local veteran leader. In general, the "non-actors" worked well within the play, and whatever Cornerstone has learned to do to help them do so, seemed to work pretty well. 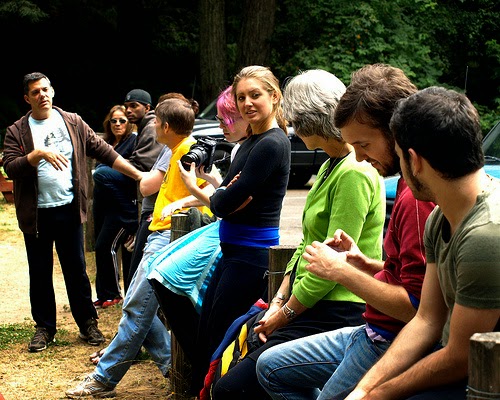 To name many more isn’t possible: the program has 65 individual bios, ranging from local grade schoolers to elders with no previous experience, to North Coast community theatre veterans, and Cornerstone Institute participants. This local participation included scenic and technical duties.

Dan Stone’s flawless technical direction is just one North Coast contribution to brag on. But those who witnessed Peter DiMuro’s enchanting choreography, or Cornerstone actors like Andres Munar (playing both Jasons), Sage Howard, Brandon Spooner, M.C. Earl and singer Michele Denise Michaels may well have future reason to brag that they saw them here.

All of this plus the outdoor setting made “Jason in Eureka” an enthralling theatrical experience. However, 90 minutes without intermission trapped in bleachers a dark distance from portajohns was probably more than should be asked of even a North Coast audience. 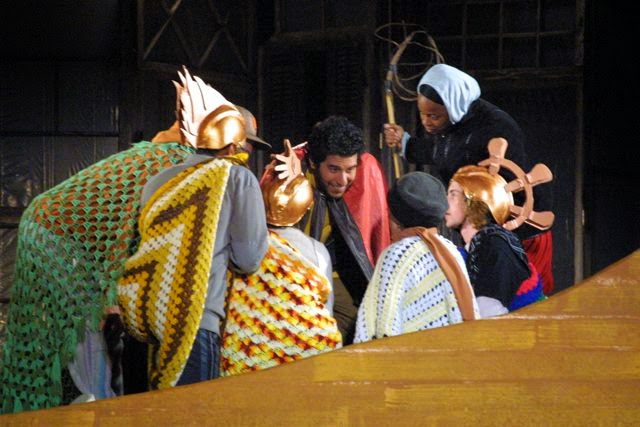 With this weekend, Cornerstone leaves the North Coast, but besides the experiences of participants and audience, it leaves behind the example of its beliefs, summarized in its "Values Statement": "We believe society can flourish when its members know and respect one another, and we value theater made in that spirit. We value art that is contemporary, community-specific, responsive, multilingual, innovative, challenging, and joyful. We value theater that directly reflects the audience. We value the artist in everyone."
Posted by BK at 10:49 PM

Other Stages and Resources