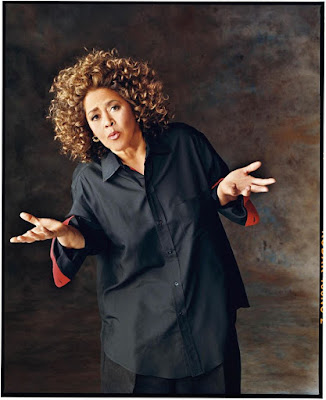 On Monday, the Yurok Tribe hosted a performance by Anna Deavere Smith in Klamath.  It was first of all, the best hosted event I can recall attending on the North Coast.   We strangers from Arcata were welcomed--and fed.  Very very well.  Before and after.

Her presentation, "Notes From the Field: Doing Time in Education/The California Chapter" about "the school-to-prison pipeline"was taken from her show at Berkeley Rep.  The larger project is funded by the Ford Foundation and others, and this local appearance seems to have been partially funded by the California Endowment.

Speaking of her research visits previously with the Yurok, "my time with the tribe was one of the most transformative experiences of my life," she declared on KHSU Homepage, and repeated at the performance.  Her quest to explore the American character for the past forty years, she said, lacked Native American voices. Her attempts to access those voices were rebuffed by those who understandably resisted others speaking for them.  But the Yurok tribe, the largest in California, welcomed her, and her presentation included several people she met there, including tribal court chief justice Abby Abinanti, and a fisherman she had interviewed just that morning.

She began with two focusing inspirations: her grandfather telling her that "if you say a word often enough, it becomes you," and the two-line poem "I, the song/I walk here."  That's a pretty good description of what she does.

Her method is to use the actual words of those she interviewed, though in reconstructed form as a kind of poetry, and to capture their personalities and voices in her performance.  At the end of her program in Klamath she spoke words of the great writer and activist of the 1960s James Baldwin, and from what I remember from his interviews and documentary appearances, she had him down cold.  So I expect her other portrayals were on the money as well.

Her artistry and methodology is exciting and inspiring, and together with the relationship with the audience, shows what theatre can do.  But the content of what these people were saying--about school, prison and everything in between--stays long afterwards. (She explains some of the issues and the intent of her project in this PBS interview.)

Shorn of abstractions and analysis, these voices clarify, and connect directly. They can however make more meaningful the studies which describe the effect of trauma on learning, and the recent finding that trauma can be passed to later generations genetically as well as culturally. 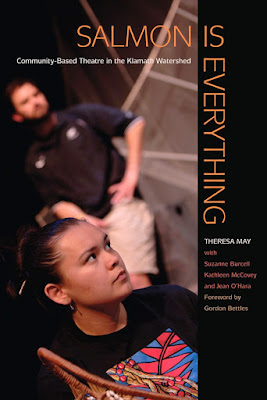 Although her main focus was the school-to-prison pipeline identified as such in a speech by President Obama  (with voices from Baltimore, Philadelphia and elsewhere as well as California) she began with a Yurok voice talking about the cultural, economic, political and personal meaning of fishing on the river, and recalling the Fish War of 1978.

This summer the Yurok tribe, the Hupa and other local tribes have been working to persuade federal authorities to increase the flow of Trinity River water into Humboldt County to prevent the kind of salmon die-off that happened on the lower Klamath in 2002.  As of this week, when a district court judge denied the attempt of central valley water districts to halt the increased flow, they have been successful.

The 2002 salmon die-off is at the center of a play created by an ad hoc group of Native and non-Native community members that HSU Theatre presented in 2006, called Salmon Is Everything.  As noted here, a book about the production and the issues it raised was published last fall, and it (also titled Salmon Is Everything) is HSU's 2015-16 Book of the Year.

On Sunday August 30 at 2 p.m., there will be a staged reading of excerpts from the play at the Van Duzer Theatre.  Theresa May, the book's author, will talk afterwards and lead a discussion.  It's free and open to the public.  There are more details at HSU Stage & Screen.

Update: The Van Duzer was nearly full for the 2 p.m. reading of Salmon is Everything on Sunday.  The audience included distinguished members of the Yurok tribe who had been involved in the Anna Deavere Smith project.  The reading was well-received and seemed to renew enthusiasm for the play to be mounted again.   During the discussion afterwards, someone said that the process of creating it and the play itself had been a milestone, and that recent progress in getting the Trinity water for the salmon this year would not have happened without this play in 2006!
Posted by BK at 11:40 PM

Other Stages and Resources